Getting an affordable MRI (without a doctor's help) 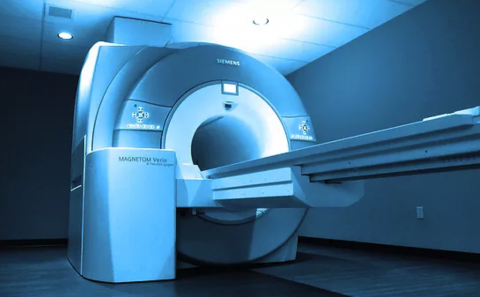 How much should a shoulder MRI cost anyway?
For reasons that I'll talk about below, my wife needed an MRI quickly, and the orthopedic surgeon she saw was pretty much unwilling to write a referral for one.

I set out to see what I could do, and started by trying to figure out how much a shoulder MRI would cost in the united states if we just didn't use our insurance at all. My wife's initial guess was $7,000. My guess was $2,000 - $3,000 . Both of us think of medical pricing as quite opaque and somewhat random.

The internet agrees with me, but fortunately there seem to be a few start-ups trying to tackle this problem. The first one I tried was https://www.newchoicehealth.com , who require you to submit a form and get an emailed response. Initially I assumed that this was so some bot (or even person) on their end could send out emails & or scrape other specific sites to find out the costs and aggregate them. After quickly getting the response email, it's pretty apparent that this is not the case. Now my best guess is that they went with this design choice to prevent their site from being scraped.

The first try was pretty much a jackpot though! New Choice Health sent back the following email :

Thank you for requesting a procedure quote using NewChoiceHealth.com. Unfortunately, we don't have any partners in our network that can provide you with a quote for that procedure. So, to help you find the right provider we have listed below a few providers who may be very competitive in your local market. Please contact them directly and utilize the information below to help find the best deal for you.

Estimated Pricing for a MRI Shoulder, Arm, Wrist, Hand (Upper Extremity) in San Francisco, CA:
Great Price $410
Fair Price $575
Expensive Price $1,050
Next Steps: Contact the providers below and ask them for their best price for the procedure you need. If you get a quote that is near the Great or Fair price listed above then you should consider that a good deal.

Fair price less than $600 That was way better than I expected.

Sadly they didn't have the prices of each of the locations, and that meant that I was going to need to call each of them. They also don't have phone numbers so I was off to start hammering through google to find phone numbers and call each and ask each of them how much it would cost.

At this point I discovered three things...
The first was that all of the healthcare providers had phone trees that were absolutely disastrous. Not once was I able to get the right department on the first try. "Press 6 for Billing & Pricing" and the nice lady says oh no, you needed "Press 4 for MRI Results, I'll transfer you". Each is different and totally random. Often there were several other insane requirements. At one provider I had to make an appointment for the MRI, then they would tell me how much it cost, then I could cancel it. (This procedure was explained to me by the secretary)

The second thing I discovered was I didn't exactly know what I wanted... Did I want contrast? How many pictures, how many directions. I took a moment to go back to do a little research and figure that out. My wife is breastfeeding, so contrast (where they inject you with a bunch of dye) is pretty much out.

The third, was that pricing varied wildly, and was even stranger than I thought it would be. Some prices were around $1,000. One of them, which we ended up going with, was having a sale . Seriously, who has a sale on MRIs? Where do they advertise that? given that pricing in general is so opaque, and people are generally tied to their insurance company why would this normally motivate people? I guess I don't know much about this market, because it sure worked on me. "Health Diagnostics - San Francisco" quoted me $200 flat because they were on sale, and I decided that was a hard offer to beat, and made an appointment for my wife.

A slightly larger bump in the road was that they said they did need "Doctors Orders", which we didn't have. The orthopedic surgeon had said he wouldn't give them because he didn't think that the insurance company would be willing to pay until we had been through 6 weeks of Physical Therapy... But I had discovered another great little startup while I was looking for MRI pricing.

Cirrus Medical Network ( https://cirrusmedicalnetwork.com/ ) Seems to basically be an online doctor who will write you a "Physicians Request" for imaging for $50. They specifically state that your insurance provider may not see it as valid, but that your more than welcome to try to submit it. They seem to also do some prescription drugs, but seem like they have a much tighter policy around that. (I didn't bother exploring it, because I didn't need it)
The website has some of the worst and most cobbled together User Interface I have encountered. (Including needing to sign up 3 times for different sections of the sight, and having at least two different passwords for what are effectively two different accounts on the same website)

So, $50 and one Medical History form later, We had our request to get "Doctors Orders". The turn-around was about 40 minutes, and the orders seem to have pulled my wife's name from her Email Address rather than from the forms we filled out on the website. They did however fix it when my wife submitted a request by email.

Why do we need to go around our insurance anyway?
My wife has a condition known as "Frozen Shoulder", or "Adhesive Capsulitis". It's unbelievably painful, makes it hard to sleep, and pretty much impossible for her to care for our son. It also is a very weird medical issue, in that it seems to be a blend of a bio-mechanical and an auto-immune issue. In her case there is a pretty good chance it's also hiding a muscle tear underneath it. If that muscle tear is there, then Physical Therapy would be deeply problematic.

It seems that pretty much any doctor, osteopath, chiropractor, acupuncturist, or ayurvedic practitioner who doesn't specifically specialize in frozen shoulder gets a whole lot wrong about it.