Fight Ossification and Build a society you can be proud of 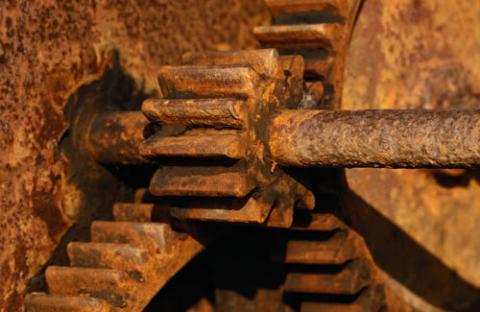 Ossification, System Building, and Creative Destruction.
When a system is young, we can use a nation in our example, but this can apply to many different systems, there is no such thing as "creative destruction". If a component of it, a subsystem, is arbitrarily removed then on average what flows in to replace it will be neither better or worse, and it simply may not be replaced at all. The system is still more full of opportunities than components have capacity to fill, and sub-systems are typically still well designed for the current environment.

As systems age the subsystems that survive take on a life of their own. They become both more integrated, and tend to develop (or simply have) mechanisms of self preservation, even at the cost of the larger system. There is nothing nefarious about this, it is simply an emergent behavior, after a while things that don't have self-preservation mechanisms usually disappear. The problem is that as the external environment, or other elements of the system change the self-preserving systems survive, even if they no longer serve the system as a whole well.

With this state comes the concept of "creative destruction" When a single component of the system that has passed maturity and entered ossification is destroyed it acts to the benefit of they system. Typically there is an excess of new system building resources that can flow in and create a new, replacement system. Typically the replacement system will typically have two trates: on average not as good at self preservation (not having been filtered by time), and on average a better fit for the current system, and environment. What's more, if the replacement system is NOT a good fit for the environment, it is far more likely to get destroyed and replaced with something that is.
For example, if all the phone companies in the US were to simultaneously fail, it would prove to be an opportunity, new and better systems would replace them almost instantly in an act of "creative destruction".

If too many sub-systems are destroyed at once, or if core systems are still being created however, there are not enough resources available to create good replacements. The time spent between the destruction and creation of replacements, would be legitimately damaging rather than simply painful, and the replacements are more likely to be "something... anything" rather than a best fit and most competitive solution.
One example of this could be if all the phone companies in Zambia were to simultaneously fail. This would play out very differently from failure in the US with replacement coming slowly, and at the cost of other development projects.
A different example of this could be if all the phone companies, insurance companies, banks, and courts in the US were to fail simultaneously. Enough of the system would be missing that some of it would remain un-replaced long enough to cause serious harm to the system as a whole, primarily because the capacity to replace systems itself would be taxed beyond it's limits.

Next the concept of ossification, which has multiple components.
The first is that sub-systems become less fit for their intended purpose over time. This is a combination of the system becoming more focused on self preservation ( explain more, like Mycroft Ward from raw-shark-texts ), and their simply being less of a fit to the environment due to inertia and environmental changes. This alone isn't ossification, it's simply institutional decay.
Ossification sets in when many of the systems have become inter-reliant and tightly coupled, as well as being focused on self preservation.
If we try to destroy a sub-system, in order to allow for creative-destruction (In this example we will call it the targeted sub-system) each of the connected self-preserving sub-systems sees that it will suffer from the destruction of the targeted sub-system and acts to preserve it. Potentially the targeted subsystem could be tightly enough coupled with other, relient, sub-systems that it's destruction would actually destroy them as well. We saw a great example of this with the mortgage crisis spreading up to being a banking crisis, and then threatening to become an everything crisis. More advanced ossification also seems to slow or prevent any sort of change and adaptation, not just drastic creative-destruction style re-builds.

Now a second, and perhaps more important feature of creative destruction, or for that matter destruction in general, is demonstrated. If creative destruction happens regularly, it prevents ossification. This is because, when something is creatively destroyed it's replacement, while possibly inter-reliant on other sub-systems, will likely have a far more loosely coupled interface with it. In fact, if creative destruction happens frequently, all of the self preserving sub-systems will actively avoid tight coupling with other sub-systems in an effort to avoid getting "dragged down with them". This general pattern is marvelous for both allowing less painful evolution of sub-systems, as well as for allowing dysfunctional ones to be destroyed without damaging the greater system as a whole.